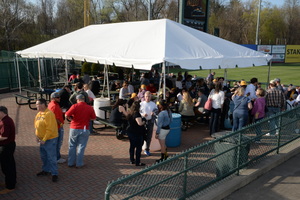 Have an entire section of the ballpark sponsored by your company. The seating area naming rights are for the following sections:

Picnic Area: Fans coming to New Britain Stadium as a group have the option to enjoy a 90-minute pre-game picnic in one of two picnic areas - one located down the left field line, and one located on the rooftop behind first base. Both areas are available for sponsorship.

Party Deck: Groups in attendance can watch the game from our Party Deck on the third base line. All special seating sections of New Britain Stadium are advertised in brochures, pocket schedules, yearbooks, and the New Britain Bees Website. They are also publicized during pre-game PA announcements. 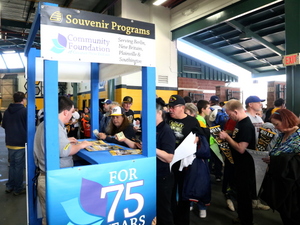 The Bees have various interactive sponsorships for services, games, and areas of New Britain Stadium.

Customer Service: The customer service window is a frequently visited area for fans with questions before, during, and after the game. Contest winners and fans that are paged are also directed to Customer Service. This sponsorship includes a PA announcement before every game and signage above the booth.

First Aid Center: Fans with medical needs are directed to the first aid center. This sponsorship includes a PA announcement and signage.

Fast Pitch Game: An extremely popular game where kids get the opportunity to see how fast they can throw a baseball, and get a prize if they hit a target in the giant Fast Pitch inflatable. Sponsorship includes PA announcements throughout the game and a banner on the side of the fast pitch-blow up.

Autograph Booth: Before home games, fans can get autographs from Bees players at the autograph booth located on the concourse of New Britain Stadium. Sponsorship of the booth includes a pre-game PA announcement and color signage on the booth itself.

Yearbook Booth: Located at the main entrance of New Britain Stadium, the booth is a popular attraction for fans looking to purchase yearbooks and scorecards at the ballpark. Sponsorship includes color signage on the booth and a PA announcement before each game.

The Bees have various items visible on the field available for sponsorship.

Bat Boys: An essential part to the operation of the game, the batboys have a company logo on the back of their jerseys. Batboys make many appearances on the field during a game in front of large crowds. Bat boy sponsorship also includes a pre-game PA announcement.

Sting: Sting is the New Britain Bees' loveable mascot. Sting appears on the field before and during the game, is involved in promotions, and walks around the stands of New Britain Stadium entertaining fans of all ages. Sponsorship of Sting includes a patch of your company logo on his jersey and a pre-game PA announcement during pre-game ceremonies, as well as a built in sponsorship of the Bees' Mascot Day, which doubles as Sting's Birthday.

Uniforms: Put your company logo on the uniform of every Bees' player and all members of the field staff. The logo will be placed as a patch on all uniform sleeves, giving your company exposure at home and at every ballpark throughout the league. This sponosrship includes all home, away and alternate jerseys.

Specialty Uniforms: The New Britain Bees host a variety of promotions with the possibility of special jerseys for those games. Sponsorship of a Bees specialty jersey includes social media and advertising prior to the game, with your company's logo featured prominantly. The sponsorship includes several game-worn specialty jerseys for your company's use as well as photographs of the team wearing the jerseys during the game.

Sponsor the New Britain Bees Gameday Staff Uniforms.  Put your company logo on the back of the highly visible game day staff of the New Britain Bees. Staff shirts are worn by all ushers, ticket-takers, parking staff, suite attendants, and on-field promotional staff.

find: Arguments to -type should contain only one letter